​In 1987, in the midst of the AIDS crisis, the NAMES Project was created to commemorate the lives of people who had died of AIDS. A collection of cloth panels, designed as memorials to specific individuals who had died of AIDS, were gathered in a permanent monument called The AIDS Memorial Quilt.
Although it’s difficult to believe today, in the beginning of the AIDS crisis, many people who died of AIDS-related causes did not receive funerals—due to both the social stigma of AIDS and the outright refusal by many funeral homes and cemeteries to handle the remains of the deceased. Lacking a memorial service or grave site, the Memorial Quilt was often the only opportunity survivors had to remember and celebrate the lives of their loved ones.
APSS is very proud to be the repository for a collection of quilts made in hounor of several community members who lost their lives to AIDS.

Quilts created by the Gay and Lesbian Centre of Regina (GLCR).
Depending on how the quilts are arranged, it can show the geese flying to Saskatchewan or away from.
​
People that were diagnosed with HIV/AIDS were returning home to Saskatchewan to die after being given a "death sentence". These quilts symbolize the people being geese returning home or 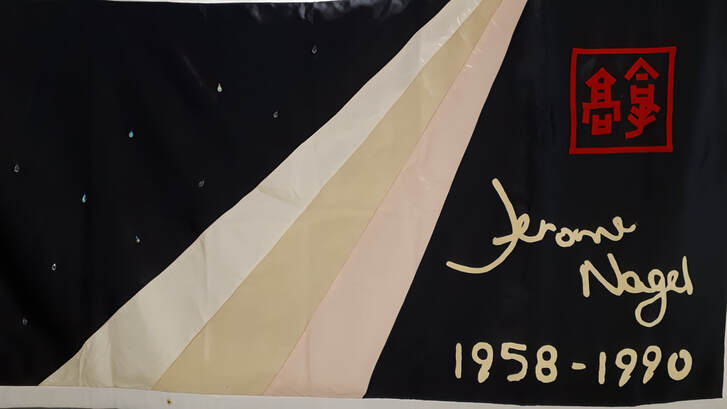 Experts from Jerome's memorial, published in the December 1990 issue of AIDS Regina newsletter:
"It is difficult to write about someone who fits many categories, all of which are special to the people who knew him. He was, as is in the memory of many, a special friend. This individual touched many lives with his sensitivity, positive attitude and outlook on life, his caring ways, concern, and love for others. He used his illness to learn from it and gather insight into himself. This became a period of growth for him. The knowledge he gained, he passed on to others and became an inspiration for those who have AIDS and those working in AIDS. In life, Jerome had many accomplishments. He was an accomplished artist and gardener. As he had a love of Japanese gardening, his year took om some of these characteristics. His artwork was unique and original. It was haunting  and compelling. Yet it sent a clear message on inner spirituality."

His art, influenced by Japanese culture, has been displayed at the Dunlop Art Gallery.

Jerome's quilt is symbolic of his personality and his artistic expression. As his major medium was the utilization of the colour black, the background of the quilt honours this theme.
The three stripes down one side represents a stylized, muted Japanese rainbow. Along with the rainbow, the crystals which give off rays of colour, are symbolic of Jerome's warm and radiant personality.
His name and the years of birth and death are done in his handwriting. Jerome used three different signatures throughout his life; this is one of them,
The "Chop" above his name is his name in Mandarin. In Mandarin, Jerome is translated into "artist". Jerome signed his letters, not only with his signature, but also with his Chop.

Jerome was a self-taught graphic artist. To his credit, are the logos of the Regina Public Library, AIDS Regina, the Gay Community of Regina, and Laser Acoustics.

​For his dedication and service, Jerome was the recipient of AIDS Regina's Community Service Award in May, 1990.
​
After his death, he was posthumously honoured, unanimously by the board of AIDS Regina, to the the People with AIDS Health Fund renamed in his honour.

It is now know as the "Jerome Nagel Health Care Fund". 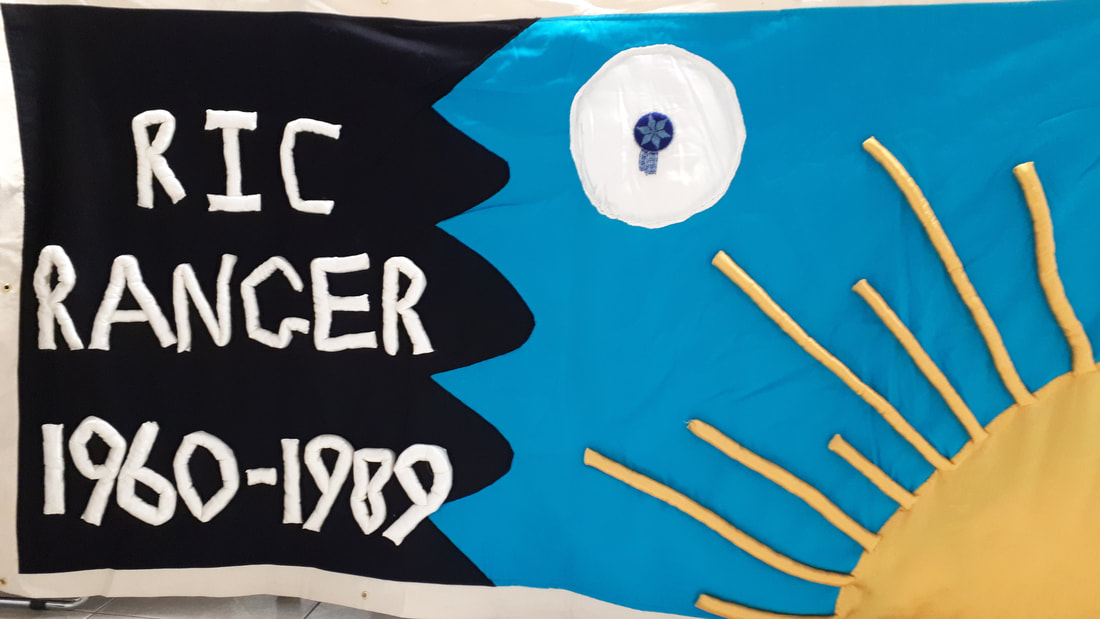 Ric Ranger was one of the first members of AIDS Regina's HIV Positive Support Group. He also attended Alcoholics Anonymous (AA) and Narcotics Anonymous (NA). His dedication to these groups never wavered, right up to his death. He was also one of the first people to access AIDS Regina's Support Services.
​
Ric liked support groups. They fulfilled his need to belong, to be accepted, loved, and affirmed as an individual.
For these support groups, Ric offered something in return. Besides his devotion, he was an example for others to follow. His was a success story.

During his life, Ric was addicted to alcohol and drugs. Many times he tried to stop. Sometimes he would be successful for a few days, a few weeks, or a few months.
Ric's success started when he joined AA and NA. THese organizations and his own desire gave him the power and commitement to stop his alcohol and substance abuse.
When Ric was diagnosed with HIV, he could have returned to his former life. The same could have happened when he was diagnosed with AIDS. In both instances, Ric showed outstanding courage and strength through a strong spirituality that did not waver. Ric stated his life was strengthened through his involvement in AA, NA, and the HIV Positive Support Group.

Ric grew up in Marcellin, Saskatchewan. He was Cree and was born in Northern Saskatchewan. At aged two, Ric was adopted by a French foster family.

During his life, Ric worked in the oil fields of Alberta, resided in Vancouver, before making Regina his home. In Regina, Ric operated his own carpentry business and was at his happiest when he was doing carpentry work.

The colours of Ric's quilt are black, white, yellow, and blue. Unknown to the designer of this quilt, these are the colours of the Northern Cree. It was if Ric's hands were guiding the designer.
The colours and design tell of Ric's battle. The black is symbolic to his addictions, the night time of his life. The black jagged line represents his efforts to stop his addictions, which were not always successful.

The blue (the sky) along with the yellow (the sun) represents the growth in his life when he overcame his addictions. It further represents the spiritual element he found within himself that was to sustain him right through his illness with AIDS.

In the last year of Ric's life, his financial situation was beset by problems. He was not able to work. His basic living expenses outweighed the income he was receiving. To assist Ric, AIDS Regina established a fund to supplement his costs.
As this fund was set up for Ric and later, fulfilled a need for others, it became a permanent part of AIDS Regina's Support Services.

In honour of Ric, this fund was named posthumously, "The Ric Ranger Emergency Living Fund". It is a living memorial to his courage and coviction.

Since September 28, 1983, Rod and Dean were a couple. There was no other way to describe their relationship. For the people who knew them, it was inconceivable to think of Dean without Rod or Rod without Dean. Friends do not talk about one of them or reminisce about the other without thinking of both of them. They were a unit.

A good description of Rod and Dean was found in a letter written by a good friend of theirs to Rod's mother on July 21, 1991:

"One of the first things that struck me was the love that they shared for each other. They complimented each other. Rod was the more outgoing, the decision maker when it came to entertainment and volunteering for AIDS Regina. Dean was the quiet support in the background.

Rod, when he made a comitment, jumped in with both feet. Dean kept everything going with his sense of humour. Dean's humour, to say the least, different. If you didn't know Dean, you would think he was being sarcastic. After getting to know him, you enjoyed his humour and were always waiting for what would come out next. That included his pet name for Rod. He called him 'Turtle Toes' as he said Rod's toes reminded him of the toes you would find on a turtle...if a turtle had toes. Rod called Dean, Dino.

In closing, I will say that I learned a lot from Dean and Rod. They taught me a lot about relationships. About a relationship of commitement, love, and caring. It was very nice that I was allowed to share this with them, even though it was for a short period of time (15 months)."

In the last months of their lives, Dean and Rod were in the Plains Health Centre, in single rooms across the hall from each other.

Medically, Rod should have died before Dean as he was much sicker. Many times, Dean had said that he hoped he would not be left alone. Rod held out so that Dean could die first. Rod followed Dean twenty hours later.

The Rod and Dean Memorial Quilt 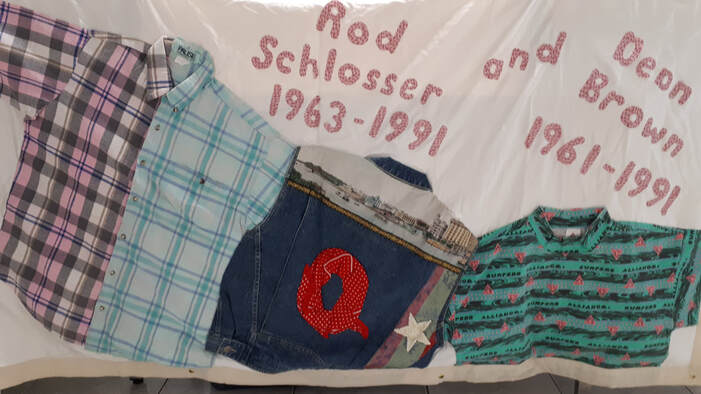 This quilt is covered with Dean's and Rod's clothing. The fact that the shirts join together at the sleeves, too, symbolizes Rod and Dean's partnership in life.

It was difficult to pick out clothing for Dean and Rod. Since they were the same size and build, they often wore each other's clothing.

The two shirts buttoned together on the left side of the quilt is Rod's. The blue jean jacket, t-shirt, and bandanna are Dean's. Dean never went anywhere without a bandanna around his neck.

The Rod and Dean Signature Quilt 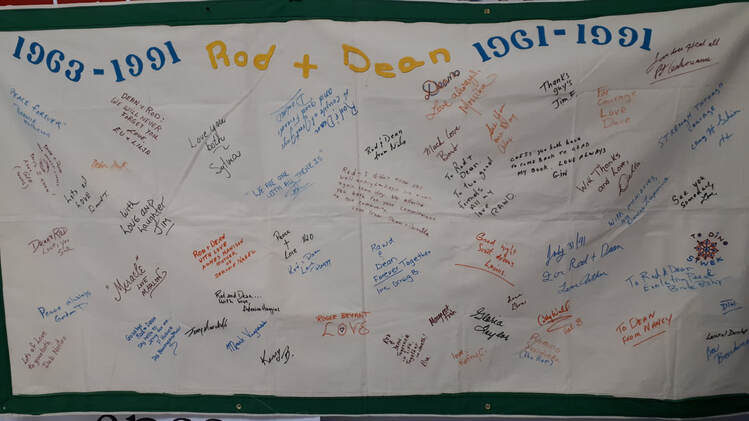 This quilt was prepared for Dean's and Rod's memorial service held in Regina on July 31, 1991. The purpose of this quilt was to allow people that Rod and Dean's lives had touched to write a personal message to them as a way of saying goodbye.
A memorial service was held by their families at an earlier date in Calgary.

Rod and Dean were both active at AIDS Regina, the HIV Caucus of Regina, and the People Living with AIDS Network of Saskatchewan. For their contributions, they were awarded posthumously, AIDS Regina's Community Service Award on  June 8, 1992. 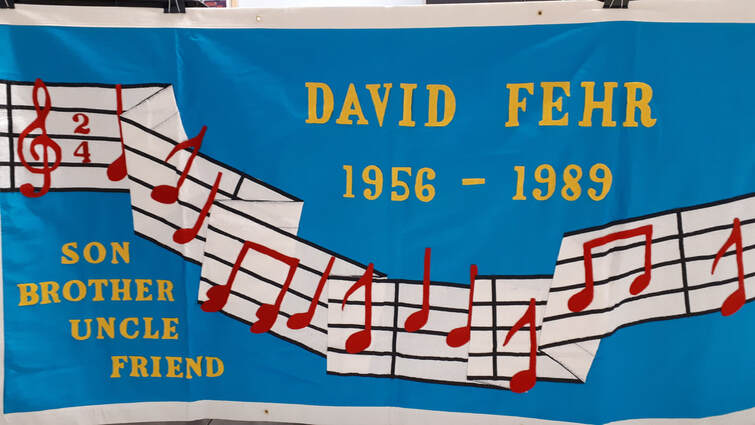 David was a special man. One realizes this when reading his obituary which stated that he was a son, a brother, an uncle, and a friend. David was all this and much, much more.

David had an outgoing and friendly personality. He was interested in others, and this showed through to those who became his friends.

The writer of this piece had the good fortune to meet David in the early 1970's while they were both employed at Robert Simpsons in the Men's Fashion Department.

"David and I became work friends. We spent lunch and coffee breaks together. It was during these lunch breaks that I was introduced to David's passion - music. After we ate, we spent our lunch breaks in record stores.

David loved music of every type, and he had a vast collection of records and tapes ranging from rock, easy listening, country and western, jazz, and folk music to classical. Although David's passion was music, he did not play an instrument, expect for the drums in band while attending school. Unfortunately, after David left Robert Simpsons, we lost contact."

David's quilt speaks to his love of music and his personality. The musical staff with the notes on the quilt is not taken from any specific tune. It simply acknowledges this musical interest.

One with musical knowledge will notice that some of the stems on the notes are facing in the wrong direction, that they should be going down when they are facing up. This was done in error.

Yet, for David, this is perfectly correct, for he did not read a note of music and would not recognize this error. It would not have made any difference to him.

His was the love of listening to music and enjoying the great pleasure it has brought since music was first composed.

The background colour of light blue on the quilt, plus the yellow lettering, represents David's warm personality.

In the mid 1970's, David moved to Vancouver where he resided until his death. In Vancouver, he was employed y the Royal Bank. He was also an active volunteer, especially with the Canadian Cancer Society.